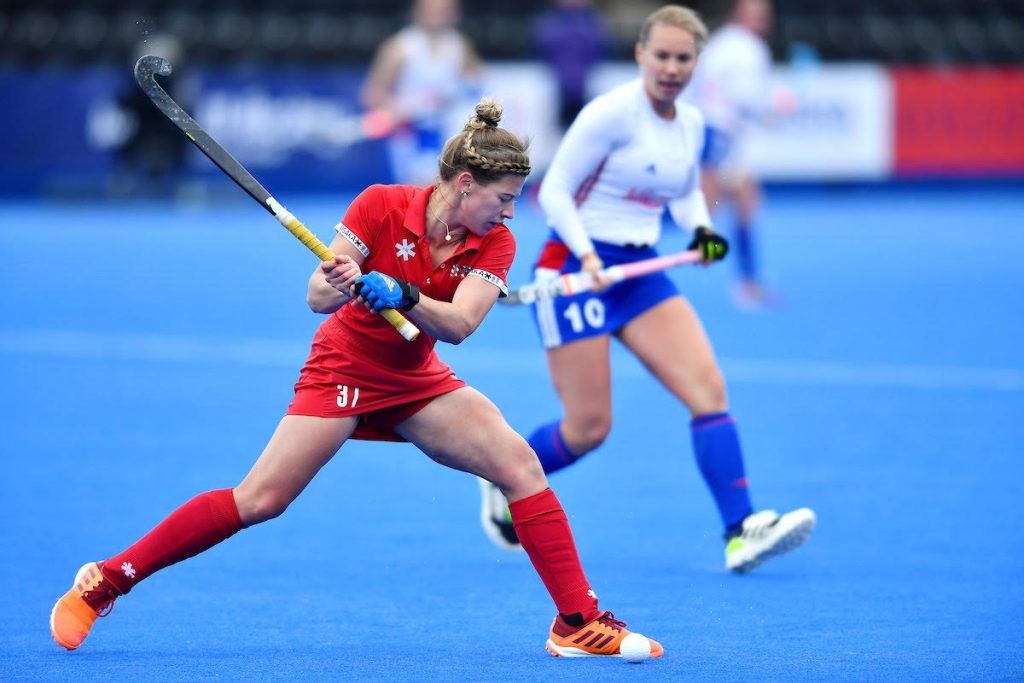 Meet Kelsey Briddell, a Saratoga Springs class of 2014 graduate currently playing for the U.S. National Women’s Field Hockey Team. Briddell grew up here in the Saratoga region and trained at Saratoga Peak Performance under her father, Dr. Bryan Briddell. She went on to make a name for herself at UAlbany (2018) as a standout star athlete, playing in the university’s first-ever Final Four in the NCAA Division I National Championships during her freshman year. She was selected for the national team earlier this year and is currently living in Charlotte, North Carolina training full-time with the National Team as they prepare for various tournaments.

Tell us a bit about growing up in Saratoga and how you got into field hockey:
“I’ve lived in the area my entire life. Growing up, a friend introduced me to the sport in 7th grade and I tried out for the modified team at Maple Ave Middle School, knowing next to nothing about how to play. The following year I tried out for the Junior Varsity team and joined a club (ADK Field Hockey) soon after that. Once I joined club, I was absolutely loving the sport and was playing all the time. I was brought up to the Varsity team as a 9th grader for sectionals and remained there for rest of high school.”

Tell us about your journey from your hometown to where you are now:

“When I started playing field hockey, I had no idea of the places it would take me. After graduating High School, I was fortunate enough to be given a scholarship to play Division I sports at UAlbany. During my freshman year, we became the first SUNY school to reach a Division I National Semi Final. After my junior season, I studied abroad in Christchurch, New Zealand. In addition to my studies, I also played for a club team there and had an incredible experience traveling around such a beautiful country. This was also my first taste at playing in a different country and it gave me a new and refreshing perspective of the sport. Upon my return, I was extremely excited and to play in my final season as a Great Dane.

When my collegiate career ended in the America East Conference Semi-Finals, I was devastated. Soon after, I knew I didn’t want to be finished playing yet. I decided to put myself out there and try out for the USA National Team. After the completion of the trial, I was named to the National Development Squad. Throughout the remainder of my Senior Spring semester at Albany, I would periodically leave for training camps held in Lancaster, Pennsylvania. After all of the training camps were completed, I was selected to go on tour with the development squad to Santiago, Chile, where we had games against the national team of Chile as well as their U-21 team. The tour took place during the same time as my college graduation, but it was an opportunity I couldn’t pass up. Following college graduation, I wanted to keep training to further improve my game. I decided to go to Mannheim, Germany to play with a former UAlbany teammate at her club for a portion of their season. When I returned to the States, the decision paid off because I was offered the chance to be a Full-Time Resident Training Player with the Senior Women’s USA National Team for the better half of a year and also completed again with the development squad on tour in Utrecht, Netherlands. Following my time as a training player, I joined the Bucknell coaching staff as an assistant coach and was playing for the USA National Indoor Field Hockey Team.

Ultimately, I resigned from my coaching position to pursue a Master’s degree in Biomechanics in the UK. Due to Covid-19, my course was cancelled prior to my arrival; however, I still went to Nottingham, England to play for a club team. However, this didn’t last long because the UK when into lockdown just a couple of months in and I returned to the US.

Due to COVID restrictions, the 2021 USA National Team trial was held virtually. Everyone submitted a highlight video and from this, players were chosen to train for a period of time in person. I was fortunate enough to be selected for one of these training blocks, which lasted approximately 6 weeks. During this time, I was selected to travel with the team to Europe to play in the FIH Pro League and I earned my first senior international cap against Belgium! When we returned, we had one more final tournament in Virginia Beach, called the Young Women’s National Championship—which is a week-long tournament of young women from all across the country competing for selection for the senior and junior squads. Following evaluation from the tournament, the 2021 USA National Team was announced and I was ecstatic to find my name on the roster.”

What are some of your favorite things to do in Saratoga?
“Growing up I have fond memories of my family going to the State Park, where my sister and I would play in the water looking for fish. I always love coming home during any season and walking the streets of downtown Saratoga. After living and experiencing so many places around the world, I can truly say Saratoga is a very special place.”

What are you doing now and what are your future plans?
“I am currently living in Charlotte, North Carolina training full time with the National Team as we prepare for various tournaments coming up this year. Outside of training, I am taking pre-requisite courses (at the moment I am in a Microbiology course), in the hopes of applying to a nursing program next year. Following that I would like to pursue a Master’s Degree in Nursing.”

What advice do you have for young people in Saratoga who have big dreams?
“If you have big dreams, don’t be afraid to pursue them. Go all in so you know you gave it your all… take that leap of faith!”