Special thanks to the author of this post (and many more), Mary Flanagan, whose unparalleled knowledge and careful research has touched so many through her stories of Saratoga’s incredible past. Also, to John Conners of the Saratoga Springs History Museum, whose assistance and patience with finding historic photos are sincerely appreciated. 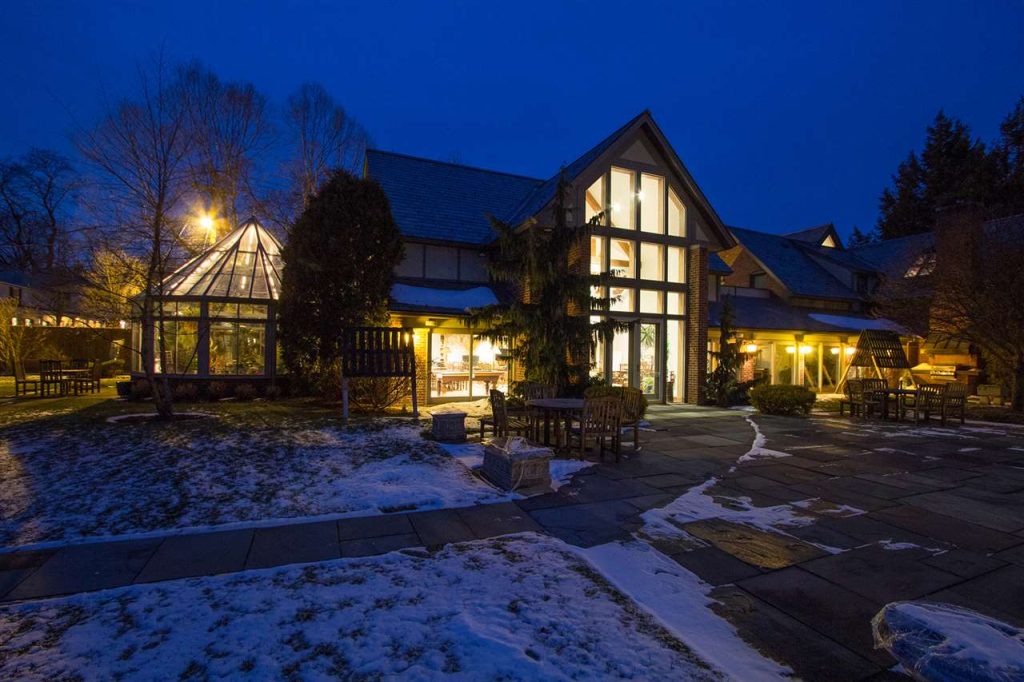 605 North Broadway was designed by architect S. Gifford Slocum and built in 1885 for Edgar Truman Brackett and his wife, Mary Emma Corliss.

Edgar was born in Wilton, New York in 1853. His family moved to Iowa, where he graduated from Cornell College in 1873. The following year returned to Saratoga Springs to make it his home. Admitted to the Bar in 1875, Edgar Brackett became a partner in the firm of Pond, French and Brackett, and began a career that was rich in public service. He was: 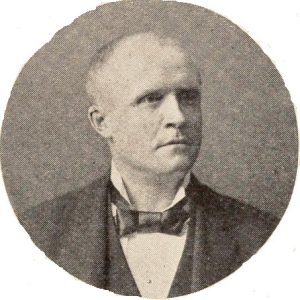 Edgar Brackett died in 1924, leaving a legacy to the city of Saratoga Springs. His wife, Emma, remained in the home until her death in 1931. Mr. and Mrs. Brackett had two sons: Edgar, who died as a child, and Charles. Charles graduated from Saratoga Springs High School in 1910 and later from Williams College and Harvard Law School after which he became a partner in the firm Brackett, Eddy and Dorsey.

Charles Brackett wrote for the Saturday Evening Post, and later became a drama critic for The New Yorker, where he found his passion for the arts. Charles Brackett had a successful career in Hollywood as an Academy Award-winning writer and producer. He partnered with Director Billy Wilder for The Lost Weekend, which won an Academy Award in 1945 for Best Screenplay. The two partnered again on Sunset Boulevard, which won an Academy Award for best Writing, Story and Screenplay in 1950. In 1953, Charles Brackett won another Academy Award for Best Writing, Story and Screenplay for the film Titanic. He was president of the Academy of Motion Picture Arts and Sciences from 1949 – 1955, and in 1957, was awarded an Honorary Oscar for Outstanding Service to the Academy.

Charles Brackett summered in Saratoga Springs until his death in 1969.

Charles Brackett sold 605 North Broadway in 1935 and it was converted into The Beverly Manor, which served as a rooming house until the 1970s, that catered to the racing crowd. 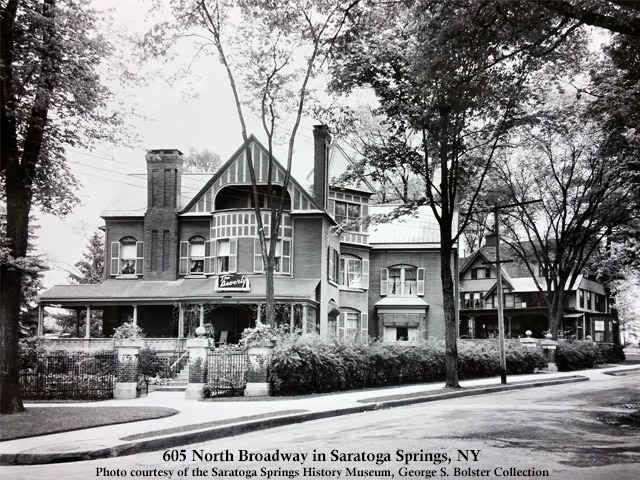 From the 1930s-70s, 605 N. Broadway was converted into a rooming house that catered to the racing crowd

In 1984, Harry Quadracci, Founder and President of Quad Graphics, purchased the property. Adjacent to the main house is the Coach House, which was originally built as a carriage house. In 1988, the Quadraccis completed the first restoration and addition to the Coach House. In 1998, an addition (which included walled gardens and garage) earned an award from the Saratoga Springs Preservation Foundation for Outstanding Achievement in Contextual New Design.

The main house was restored to its original splendor. Attention was given to detail of the woodwork, brick and tile to remain consistent with the original style of the late 19th century. The staircase in the main house is a “hanging staircase” made of North American beech wood, a very heavy and strong wood. Beech wood was not a common building material until the 20th century and the invention of power tools. 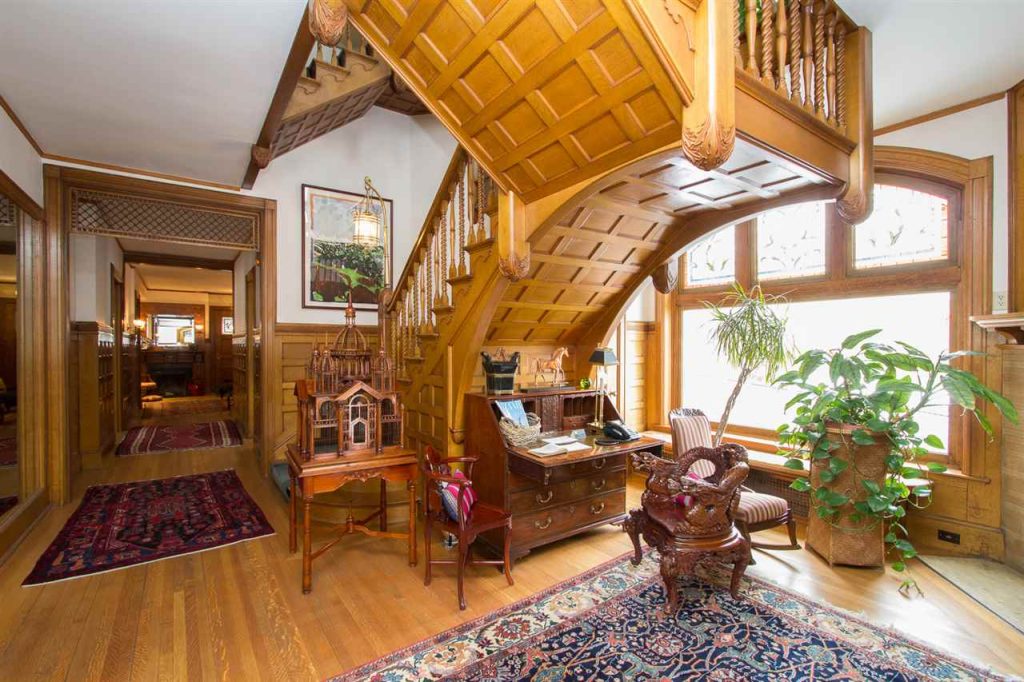 The “hanging staircase” in the main house, made of North American beech wood

The Quadraccis named the main house “The Brackett House” in honor of Edgar Brackett and his family.

Today, the property has over 17,000 square feet of living space, including 17 bedrooms and 17 baths. Magnificent and beautifully manicured grounds surround the Brackett House and the Coach House which sit on a 1 acre fenced lot. The property is currently listed for sale for $4,500,000. 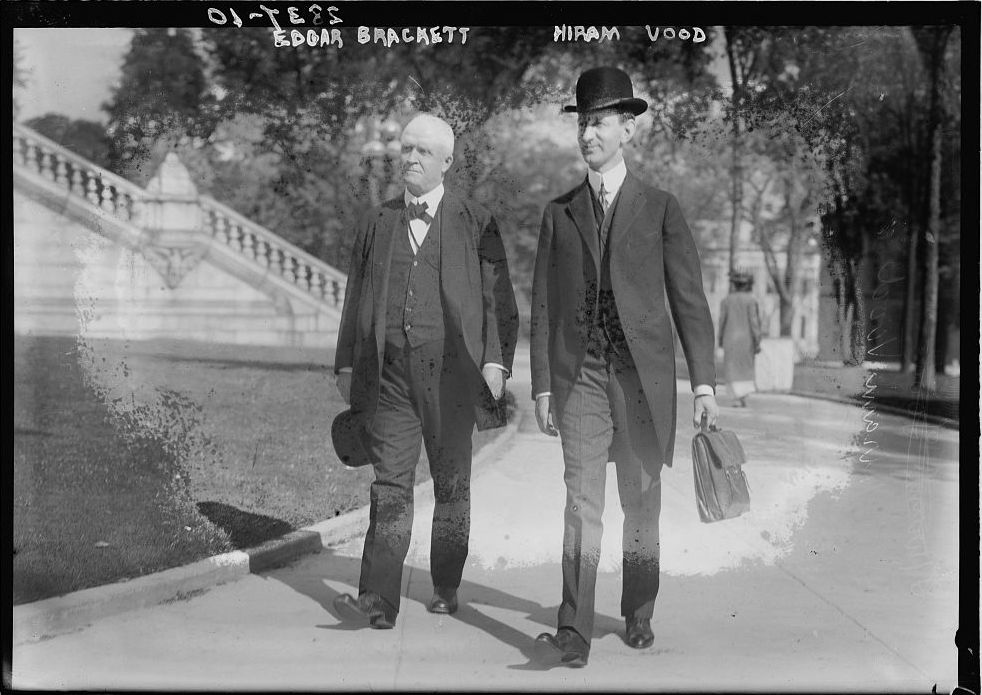