Proceeds Donated to Local Rebuilding Together & Habitat For Humanity 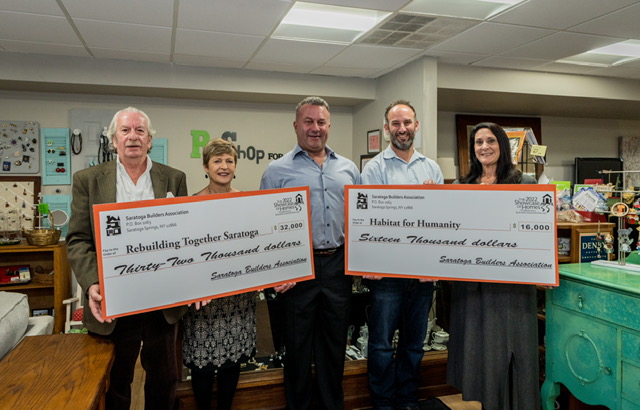 The Saratoga Builders Association is excited to present proceeds totaling $48,000 from the 2022 Saratoga Showcase of Homes to its two designated local housing charities: Rebuilding Together Saratoga County and Habitat for Humanity of Northern Saratoga, Warren and Washington Counties. The Saratoga Builders Association is proud and fortunate to have been able to contribute nearly $1.5 million dollars to these organizations over the past 26 years.

Due to ongoing labor and material shortages, only five homes were included on this year’s tour: Belmonte Builders, DSG Construction & Remodeling, Kodiak Construction, Trojanski Builders and Witt Construction. Still, it attracted more than 2,500 visitors over two weekends, with all ticket proceeds benefiting the above mentioned organizations. In what has become an autumn tradition in our area, the Saratoga Builders Association is dedicated to this long running show being an integral part of the fabric in our fall season.

“Thank you to everyone who came together to make this year’s Showcase of Homes a success, including the amazing builders, everyone who bought a ticket, and of course, the Saratoga Builders Association,” says Michelle Larkin, Executive Director of Rebuilding Together Saratoga. “We are extremely grateful for the Saratoga Builders Association’s commitment to supporting our work over the years.”

For more information on the Saratoga Showcase of Homes, or the Saratoga Builders Association, contact: Barry Potoker, Executive Director at (518) 366-0946 or bpotoker@saratogabuilders.org.

About the Showcase of Homes
This annual community event is made possible only with the generous support of over 75 corporate and media sponsors. The 2022 Saratoga Showcase of Homes, celebrating 26 years of exceptional homes, was held on October 8-9 and 15-16. All the homes were located throughout Saratoga County and the proceeds benefited two local charities – Rebuilding Together Saratoga County and Habitat for Humanity of Northern Saratoga, Warren and Washington Counties. For more details on the homes, builders, award winners, and virtual tours of every home, visit saratogashowcaseofhomes.com.

About Rebuilding Together Saratoga
Rebuilding partners with volunteers year round to ensure that homeowners can live independently in safe and healthy homes and build healthy neighborhoods through programs like home repair, home safety assessments, and home beautification projects. Learn more.

About Habitat for Humanity of Northern Saratoga, Warren and Washington Counties
Habitat for Humanity is a non-profit housing organization that coordinates all aspects of home building to those in need in our community, including fund raising, building site selection, partner family selection and support, house construction, and mortgage servicing. Learn more.